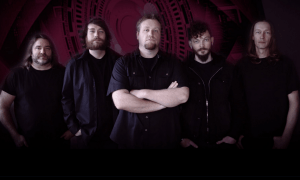 DEEPFALL comes out of Grand Rapids Michigan. They are five guys who come from  different backgrounds musically. Singer Terry Dewit’s influences come from hard rock, metal, blues and R&B, while keyboardist Tim King draws from bands like Journey, Metallica and Billy Joel. Jim Sully on drums is into thrash, Slayer and King Diamond are a couple bands he is influenced by. Guitarist Tim Ossenfort gathers influence from 70’s progressive rock and electronic music and bassist Taylor Brandt is into prog and death metal.

With influences from all these different genres of music these guys came together and put out some powerful music best described as a mix of  rock, metal and alternative. They have toured with the likes of HELLYEAH, Texas Hippie Coalition and Alter Bridge to name a few. They are about to embark on a tour with Sevendust for the second time. Check out DEEPFALL on Facebook for more details.

They have put out a self titled EP and –Revolution’ is the debut single off of that, check out the video below. It includes 5 new songs on Vinyl, CD, Digital Download, and Streaming.

The single and title track “Revolution” hinges on an ominous beat and airy keys before guitar kicks in full force. The chorus trumpets a call-to-arms, “It’s a revolution.”

“Terry’s concept was standing up against technology, government, social media, and all of the things controlling our lives,” reveals King. “It’s about people banding together and deciding to take back control. The concept felt fitting as we were going through an internal revolution with a new plan, new music, and a new chapter.”

Lush progressive-style keys echo through clouds of distortion on “Into the Sun,” illuminating the group’s grasp of rich atmospherics. “There are 93 keyboard tracks,” smiles King. “It’s about going through life worrying about things in your past, having anxiety, and coming to a point where you realize you just need to live on and move forward.”

The interplay between the guitar and keys drives the ghostly “Phantom,” which represents the EP’s emotional apex.

“It’s written from the viewpoint of Terry passing and speaking to his family about moving on,” notes King. “From the grave, he’s saying, ‘Everything is okay. I’ll always be there’.”

“Fly Me to the Moon” charges forward with a galloping groove, and the finale “Isolation” culminates on an arena-ready refrain buoyed by hypnotic harmonies.

“It’s our ballad,” King goes on. “It’s just about being lonely, depressed, or trapped inside your own mind.”

In the end, DEEPFALL present a new vision for hard rock powered by five distinct personalities with a common goal.

“We pour our hearts out and put our blood, sweat, and tears in the music,” he leaves off. “We hope it helps you let your anger out, calm down, or get through the day. There’s a lot of deep thought and emotion within the music. We’re trying to share our stories and hope others can join on the journey.”