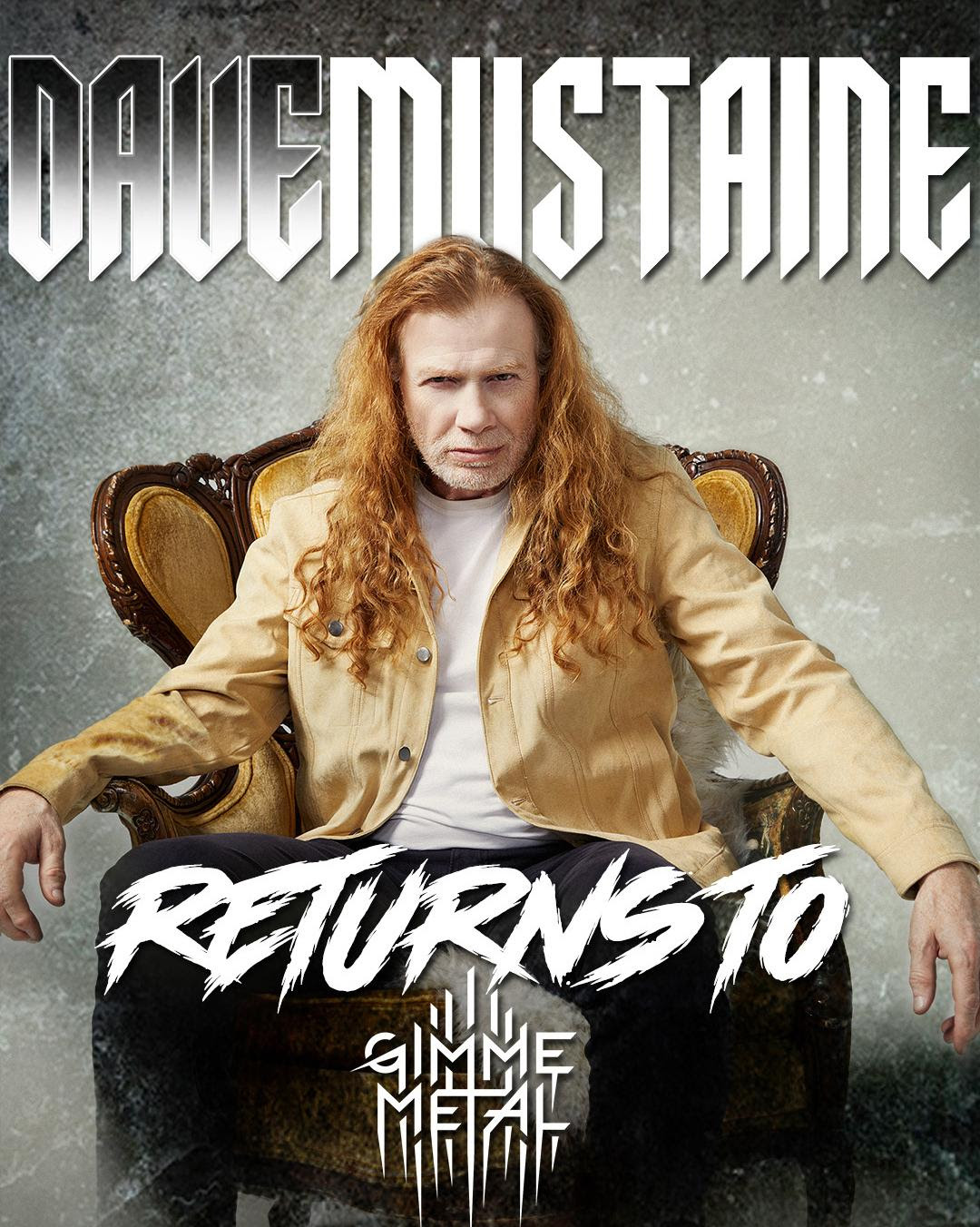 August 22nd, 2022 — Dave Mustaine, the Grammy award-winning guitarist, lead singer, songwriter, and founding member of legendary band Megadeth, is returning to GIMME METAL, the world’s only 24/7, all-metal streaming radio station, as DJ and host of his hugely popular The Dave Mustaine Show. His next episode is set to air at 12:00pm PT / 3:00pm ET on Thursday, August 25th with a new show to air at that time each Thursday to follow.
During each segment of The Dave Mustaine Show, thrash metal’s forefather will showcase the music that has inspired and influenced him as a musician, while also entertaining listeners with his deep knowledge of the genre, years of war stories from the road, and personal anecdotes about the artists, producers, and various celebrities he’s encountered throughout his illustrious career. Fans can join the chat and talk directly with Mustaine during his shows by joining The Brigade for $4.99 a month at gimmemetal.com.
Comments Mustaine, “I’ve always wanted to do radio that is strictly my show, my songs, my way. GIMME RADIO lets me play what I want to play and say what I want to say… no restrictions.”
The return of The Dave Mustaine Show comes in advance of the release of Megadeth’s anticipated sixteenth studio album, The Sick, The Dying… And The Dead!, scheduled to drop on September 2nd via UMe. The Sick, The Dying… And The Dead! consolidates a furious return to form that began with the Grammy winning-Dystopia, while pushing forward musically and marking Mustaine’s recent triumph over throat cancer. The record boaststhe ultra-frenetic riffing, fiercely intricate solos, and adventurous spirit the quartet are known for, all laced with signature virtuosity and precision and Mustaine’s singular sardonic snarl. This album combines all the crushing musical motifs that have made Megadeth both repeat metal disruptors and revered genre flag bearers.
Metal stands among the world’s most popular music genres, with one of the most dedicated and passionate fan bases. Despite this fact however, music services have largely ignored metal and its variety of sub-genres in favor of mainstream music and computer-generated playlists. In the process, these services promote the same artists and same albums; they have become homogeneous and feel similar to commercial radio. They leave fans of music that sits outside the mainstream without a way to discover new, exciting artists in the genres they love.
GIMME METAL is different. It plays metal exclusively and is focused on building a community of energized and connected metalheads from around the globe. By enlisting the expertise of DJs like Dave Mustaine, GIMME METAL listeners are treated to the stories and context that bring music to life and make the discovery of new bands possible.
Since GIMME METAL’s launch in 2017, it has become metal fans’ premier destination for music discovery and community. Because the service is focused solely on metal, in that time it has forged close alliances with metal labels, news outlets, and fans both stateside and beyond. Now, with the return of Mustaine to their DJ roster, GIMME METAL will continue to reach millions of metal fans from around the globe.
“It’s amazing to think that the guy behind Killing Is My Business and Peace Sells and the killer record Dystopia, a guy who basically invented the thrash genre, is back on GIMME METAL,” says GIMME METAL co-founder and CEO, Tyler Lenane. “We’ve had a preview of what Dave likes to talk about on his past shows and heard lots of his stories – and we know that our listeners and his fans are going to be blown away that he’s back with even more chronicles. This show shouldn’t be missed by any metal fan.”
GIMME METAL is a free downloadable mobile app on iOS and Android, available in the App Store. Now, it’s easier than ever for metal fans to listen to the best in extreme music and connect with other metalheads all over the world. The free app gives listeners a more convenient way to listen to GIMME METAL on the go and in the car. Through the app, fans can listen to their favorite DJs’ shows, purchase a vinyl copy of whatever the DJ is playing, add records to their wish-list for purchase at a later date, and participate in the GIMME Chat to communicate directly with DJs, artists, and other fans – and they can headbang 24/7!
Don’t miss new episodes of The Dave Mustaine Show every Thursday at 12:00pm PT / 3:00pm ET, available only through the GIMME METAL app and on:gimmemetal.com.
For additional information on GIMME METAL, email info@gimmeradio.com.
http://www.gimmemetal.com
http://www.facebook.com/gimmemetal
http://www.twitter.com/gimmeradio
http://www.instagram.com/gimmeradio

About GIMME METAL:
GIMME METAL is the ultimate new music service for the true music fan, and the only online music service designed with the idea of community at its core. Fans can connect directly with their favorite artists by listening to their music (for free) and supporting them through tipping, joining the monthly vinyl subscription, and merchandise sales. GIMME is a community of over 350k fans from around the world where artists and tastemakers choose the music, and everyone is welcome to chat and socialize while they’re listening. Musicians and fans can use GIMME’s unique tools to connect and curate a music channel, while the entire fanbase chats and reacts in real time, building a new kind of community around music curation. We are home to DJs like Dave Mustaine of Megadeth, Jeff Becerra from Possessed, Blasko, Brian Posehn, Johan Hegg from Amon Amarth, Will Carroll from Death Angel, numerous writers, metal scholars, labels like Nuclear Blast, Decibel Magazine, and festivals like Wacken. Our founders are all music executives with extensive experience at digital music services like Beats, Apple Music, Google Play, & Napster. Learn more at www.gimmemetal.com, or download the free GIMME METAL app.
Share and or comment