Monday, August 15th, 2022 – Multi-platinum powerhouses, Five Finger Death Punch and Brantley Gilbert, have announced today that they will be joining forces this fall for a massive US arena tour with support from newcomer Corey Marks. Produced by Live Nation, the tour will kick off in Grand Rapids on November 9th and lay waste to 20 more cities before wrapping up in Las Vegas on December 17th (full routing below). Fan club pre-sales for both artists start at 10am local on Tuesday, August 16th. All other pre-sales begin at 10am local on Thursday, August 18th. Download the official Five Finger Death Punch Fan Club app here. Tickets go on general on-sale at 10am local on Friday, August 19th. For full info visit fivefinderdeathpunch.com and brantleygilbert.com.

This epic run is not the first time Five Finger Death Punch and Brantley Gilbert have joined forces. The two artists brought the worlds of hard rock and country rock together when they partnered on their global #1 hit, “Blue On Black” in 2019. The track also featured Brian May, the song’s original performer, Kenny Wayne Shepherd and was in support of The Gary Sinise Foundation, to benefit first responders. To date, the collaboration has garnered a staggering 110 million YouTube views and 62 million Spotify streams, proving that this very special tour should not be missed by fans of either artist! 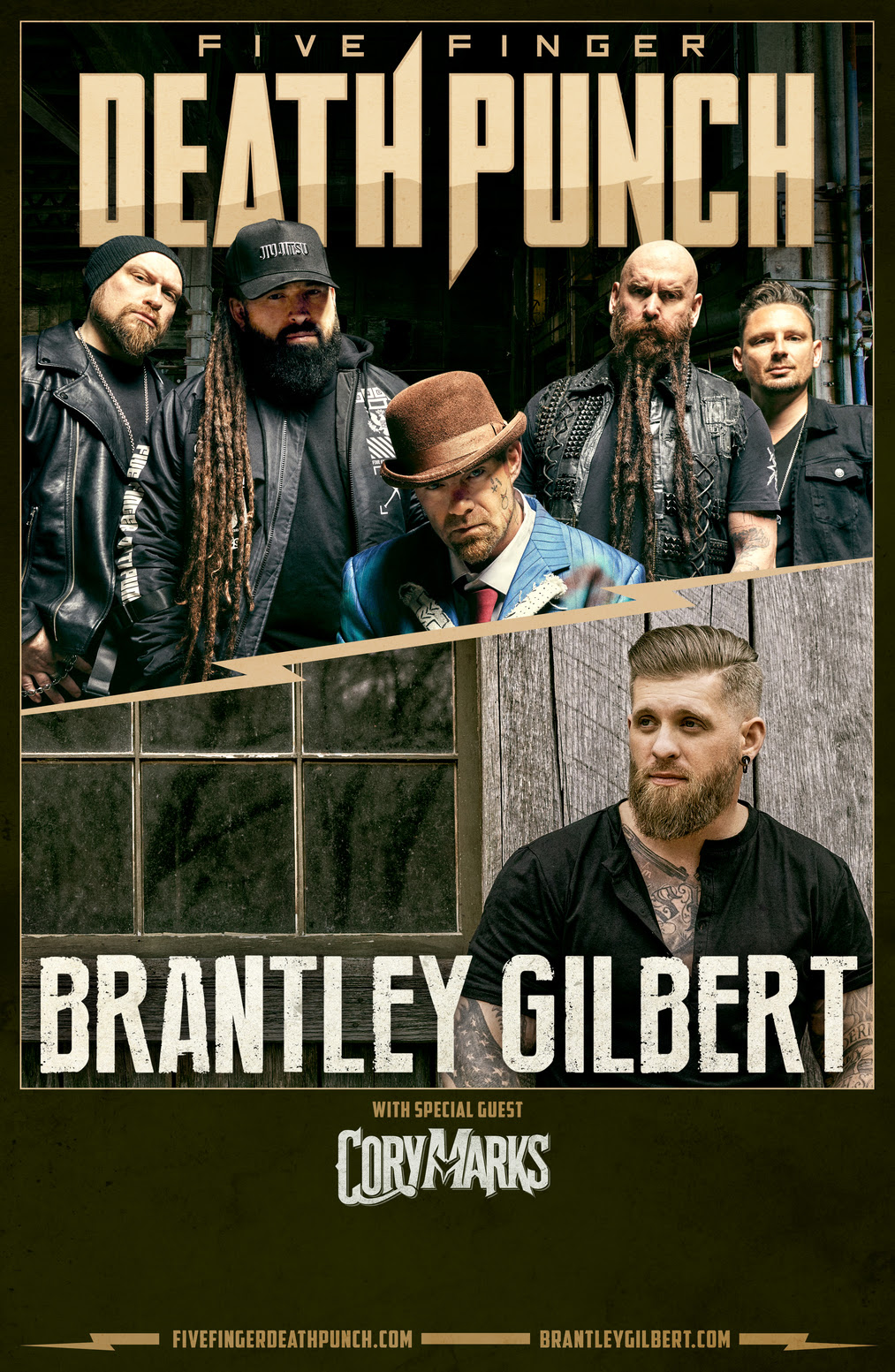 Five Finger Death Punch are set to release their ninth studio album, ‘AFTERLIFE’, this Friday, August 19th via Better Noise Music. Pre-order ‘AFTERLIFE’ HERE. The latest single from the new album, “Times Like These” is already quickly climbing the charts. Five Finger Death Punch recently set the world record for most consecutive Mainstream Rock Airplay #1 hits. The band also appears on screen in the upcoming Better Noise Films movie, The Retaliators in theaters starting September 14.  Their song “Darkness Settles In” is featured on the soundtrack which is out September 16. Presale tickets for the movie and more information can be found  via RETALIATORSMOVIE.COM.

Also, this coming Friday, Five Finger Death Punch will kick off their mammoth summer tour in Ridgefield, WA with very special guest Megadeth and support from The Hu and Fire From The Gods. For full routing of the summer tour and for tickets click here.

5FDP have amassed over 8 billion streams to date. ‘AFTERLIFE’ is the highly anticipated follow-up release to their 2020 album, F8 which debuted at #1 on rock charts around the world and Top 10 on the Mainstream charts in the USA, Austria, Australia, Canada, Finland, Germany, Sweden, Switzerland, the UK and more.

Brantley Gilbert recently released “Son Of The Dirty South” featuring Jelly Roll via The Valory Music Co., readying fans for the Son of The Dirty South Tour, where the friends turned collaborators will join forces on a run of tour dates across the southeastern U.S. this summer. Marking their first collaboration, the pair co-wrote “Son Of The Dirty South” with Andrew Baylis, offering a look into their southern upbringing and brandishing their appreciation for all things unruly, rowdy and loud. Listen to the song HERE and watch the official music video HERE. Gilbert has been back in the writer’s room and studio preparing more new music to be delivered later this year.